This letter was published in The New Paper on Saturday 28 August 2010.

I applaud the efforts of Dr Vivian Balakrishnan, the Minister for Community Development, Youth and Sports and his organising committee for putting Singapore on the world map through the Youth Olympic Games (YOG).
Undoubtedly, sports can help to unite the world.
As with any huge event, teething problems are bound to set in - no matter how meticulously the event is planned.
Some 30 years ago, during my public relations stint in broadcasting, I was part of the organising committee that planned the Asia-Pacific Union Broadcasters conference.
Despite careful planning, there were still some problems that arose from time to time.
I can, therefore, understand some of the lapses that have occurred in organising this major sporting event.
Despite his hectic schedule, Dr Balakrishnan made it a point to be at several venues, mingled with the athletes and volunteers during the games and meal breaks, giving them encouragement and support.
Certainly, the minister has worked tirelessly to make the event a success.
But there is much unhappiness on the ground because many feel that the projected expenses for the YOG - $387 million - is too lavish.
The revelation from the Auditor-General Office's on lapses of fund management at several government agencies has also caused dissatisfaction among Singaporeans.
For instance, some nursing homes did not get the full subsidies they should have received from the Health Ministry.
The feeling is that feedback is not well-heeded and this is, perhaps, why some netizens have resorted to posting their frustrations online.
RAYMOND ANTHONY FERNANDO
Posted by rayhope at 9:35 AM No comments:

NEW BOOK: “There's LIGHT at the end of the DARK TUNNEL” 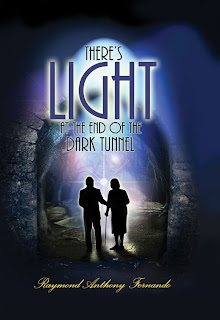 How do we react when we face huge challenges in life? Can we learn to forgive? Does the devil exist? And does practising a faith help provide us with a smoother life journey? Drawing on his personal struggles, Raymond Anthony Fernando discusses some of these issues in this collection of stories titled, “There's LIGHT at the end of the DARK TUNNEL.”

In this book, Raymond tells of strange encounters, untold paranormal incidents, some inspirational stories and testimonies of God's love. Replete with suspense and mystery, the book will keep readers on the edge of their seats with stories such as “And then, there was light”, “Dad's near fatal accident”, “The green and beige house”, “The power of prayer” and many more.

Recounting his spiritual and emotional encounters and providing moving testimonies of his faith journey, Raymond also testifies how the power of prayer can work wonders and help us see light at the end of the tunnel.

For Singapore readers: To order a copy, kindly send an email to Raymond at his email adress at rafcutie@singnet.com.sg . Book can be mailed to the reader by post ($2 mailing charge will be added to cover postage cost).

DEPRESSION - Look out for these warning signs!

Having gone through depression for a few years and have recovered fully from it, I would like to share with you some of the warning signs that you need to look out for when coping with depression.

3. Losing interest in everything

7. Inability to experience pleasure, even in situations that are normally pleasurable

8. Feeling worthlessm - that life is meaningless

9. Having thoughts of suicide

For ladies, depression sometimes comes right before their menstrual period. Some women expect to feel depressed, even making a habit of it. There is a way to fight it. First of all, take your mind off it. Do things that you enjoy doing, like dancing, listening to music and watching comical movies. Engaging in happy things makes you feel happy and also makes you look confident.

Note: Any change, serious loss or stress - e.g a divorce, the death of a loved one, the loss of a job, or move to a new home can trigger depression, usually temporary, but sometimes requiring treatment.

Posted by rayhope at 4:54 PM No comments:

DAMAGES FROM FLOODS AND RAINS - Charity should begin at home

Raymond's letter to the New Paper on the above subject is published today in the New Paper, Monday 2 August 2010, page 18.
I refer to the report, “Who should pay when this happens?” (The New Paper, July 25).
Though the authorities have indicated that the recent floods and fallen trees are considered acts of God, the Government agencies involved must also bear some responsibility for those who have suffered hardship.
We are not only facing an ageing population, but we are also witnessing ageing trees.
When the oil slick in the Gulf of Mexico hit homes, businesses and livelihoods, the National Alliance on Mental Illness in America took up the matter with British Petroleum asking the company to provide financial support for those affected. That is the way to go.
Project Manager Chua Loong Wai, who was crushed to death by a fallen tree was only 32 when he lost his life. He perished in a most cruel way.
His family members must be going through enormous pain and suffering. Surely there should be an effort to see that they are not put under more stress because of difficulties in securing compensation?
The Singapore Government has been giving generously in cash and kindness to support victims and families affected by natural disasters in other countries. And it has done so almost immediately. No questions asked.
I wonder whether our own citizens who have suffered losses caused by floods and fallen trees have got the same kind of assistance.
Shouldn't charity begin at home?
Certainly, there needs to be better welfare for Singaporeans going through the stresses of life, and these include citizens who are marginalised.
In addition to the money and resources that is being given to countries affected by natural disasters, the Singapore Government should start an emergency fund to help Singaporeans affected by disasters in our own country - natural or otherwise.
The National Environment Agency could also start a fund-raising effort to help the affected families.
I have every confidence that our citizens would readily come forward to support this worthy cause. Religious bodies could also be roped in to lend support to the affected victims and their families.
Only when we are able to care for each other unconditionally, can we truly build a gracious, caring and cohesive society that will stay resilient in facing the many challenges ahead.
RAYMOND ANTHONY FERNANDO
Posted by rayhope at 7:58 AM No comments: