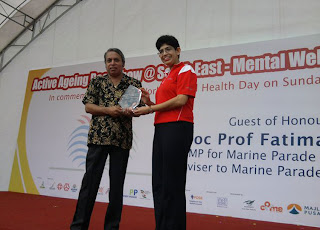 Raymond Anthony Fernando is selected as the Health Promotion Board and Silver Ribbon Champion of Mental Health for the year 2010.

Here Raymond is seen receiving his award from the Guest of Honour, A/Prof Fatimah Lateef, MP for Marine Parade GRC on Sunday 3rd October 2010.
Posted by rayhope at 5:15 PM No comments:

Stigmatisation can cause discrimination in the workplace and in the community, unnecessary violence and inappropriate hospitalisation.

Sufferers will experience a loss of self esteem, self worth and a complete loss of hope.

In extreme cases, the effects of the stigma can lead them to harm themselves.

A video titled Stressed has been uploaded on YouTube and features a woman shouting at passengers on the MRT.

At one point, the woman scolds a man who is sitting on the priority seats and chases him away.

The video is fast becoming viral.

Netizens, including those on Facebook have passed all kinds of humiliating and insensitive comments about the woman, who is obviously unstable.

This insensitive remark leads others to poke fun and humiliate the woman.

Here is one comment I saw: “Oh my God. Ha ha. Need someone like this in every carriage on the MRT. Then no one will sit on the reserved seats.”

Another one commented on her state of mind and warned: “Stay away from her...”

There were more comments, some of them even more offensive.

With the new media reaching out to millions, such degrading comments will further stigmatise the mentally ill.

The bottom line - when people don't understand mental illness, they become biased towards the sufferers.

In general, people tend to fear or dislike what they don't know because they view it as a threat.

I urge the Government to enforce the Mental Capacity Act and take swift action against those who deliberately abuse and humilate the mentally ill.

To this end, I suggest we rope in stigma busters among mental health care providers, grassroots leaders and advocates within the community who can help identify such perpetrators.
As we mark World Mental Health Day tomorrow, I hope that those who discriminate against the mentally ill will spare a though for pyschiatric patients who are struggling to cope with their illnesses.

RAYMOND ANTHONY FERNANDO
Posted by rayhope at 8:44 AM No comments:

Viewpoints: Letter to My Paper: Spare a thought for the mentally ill

Raymond's letter to MY Paper is published today, Thursday 7 October 2010 on page A17

Sufferers of mental illness are often stigmatised, which leads to discrimination in the workplace and the community.

These people experience a range of emotions, from depression and shame to guilt and loneliness.

Their self-esteem drops and they get overcome by a sense of hopelessness. In extreme cases, the stigma attached to their condition leads them to commit suicide.

Recently, a video titled, “Stressed” was uploaded on YouTube. It features a woman ranting and raving at passengers on board an MRT train and, at one point, she scolds a man on the priority seat and chases him away. The video has gone viral. To date, the original video has been viewed more than 330,000 times.

Netizens, including Facebook users have passed all kinds of insensitive comments about the woman, who is obviously unstable.

With the new media reaching out to millions, such degrading comments will further stigmatise the mentally ill.

The bottom line is this: People become biased towards the mentally ill because they do not understand mental illness.

In general, people tend to fear or dislike what they do not know know because they view it as a threat.

I urge the Government to take action against those who abuse and humilate the mentally ill.

Mental heath-care providers, grassroots leaders and advocates for the mentally ill may be able to help identify such perpetrators.

As we celebrate World Mental Health Day on Sunday, I hope that those who discriminate against the mentally ill will spare a though for pyschiatric patients who are struggling to cope with their illness.

MR RAYMOND ANTHONY FERNANDO
Advocate for the mentally ill
Posted by rayhope at 6:58 PM No comments:

A timely reminder to value marriage

Minister Mentor Lee Kuan Yew's candid revelations in The New York Times about his personal life, which came just weeks before Mrs Lee's death , were a timely reminder to all of us to value and cherish the marriage bonds.

Undoubtedly, MM Lee has observed the sanctity of marriage in every sense of the word by caring and loving his wife “in sickness and in health.”

People will have to grapple with pain and suffering when they see their loved ones struggle with life-threatening illnesses, till the inevitable end.

Love can be wonderful, but it can also be very painful when suffering places us in despair.

Yet there is something hidden in suffering which makes us more aware of who we are, why we are here and where we are heading.

And in a moment of suffering, that awareness become intense.

It was good that MM Lee spoke about the pain of caring for his bedridden wife, and I'm sure that on this day, the thoughts of many Singaporeans will be with him and his family.

RAYMOND ANTHONY FERNANDO
Posted by rayhope at 7:28 AM No comments:

Mental illness: Vital for caregivers to have support

My letter on the above subject \was published in The New Paper on Monday 4th October 2010.

I refer to the report, “Father and son were always together (The New Paper, Sept 27).

The alleged murder-suicide case involving Mr Shariffudin Abdul Kader and his mentally disabled son is yet another heart-wrenching story of how many families are struggling to cope with mental illness.

Mental illness is never easy to manage. Relationships are torn apart, home and families are lost, and anticipated futures evaporate.

Respect is eroded and a person is often left with nothing and no one — and at a point in their lives when they are the least capable of helping themselves.

This is why caregivers need vital structural support.

It's understandable that many people give up hope and make decisions based on the need to ease the pain of the moment. Mr Shariffudin Abdul Kader who loved his son dearly, probably felt that way.

And so did the Singapore-born Tan Hung Kiat who killed his schizophrenic wife in Australia with a fatal dose of her psychiatric drugs.

The toll of caring full time for his wife for 19 years was clearly too much for him. He was drained out - physically, mentally and probably financially.

The Institute of Mental Health's vision of becoming the leading mental health centre in Asia by 2012 can be realised only if there is an excellent support structure for caregivers.


RAYMOND ANTHONY FERNANDO
Posted by rayhope at 12:48 PM No comments: